Remember the show "Batman" and how they would head to the 'bat cave'? We've recreated the bat cave for Nathan. He's always had his bed stuffed full of animals, pillows and blankets. He hardly uses any of them, but he's constantly surrounded by them. He can't sleep in a tidy bed.
We were given two suggestions. One--weight a few of his animals with rice or beans to make them heavier. Many 2E kids like the weight on them to help them feel anchored to the bed. Two--curtain off his bed so it's totally dark. Since he's on the bottom bunk, that one was easy to do. We haven't gotten around to weighting his animals, but we did curtain off his bed. We took his baby quilt (he loves the colors and patterns) and hung it up for him. We asked if he wants the head and the foot of the bed curtained off as well, but he has declined the offer thus far.
I've started sending him to his bed to calm down if he gets too upset. We have repeatedly explained that it's not punishment, it's giving him a chance to relax so we can help with whatever he needs. It does seem to help him calm down. I don't think it's the dark since the ends are open. It's not all that much darker in there. I think it's the idea of being secure inside walls.
Here's a picture of Nathan waking up in the 'Nathan cave'. 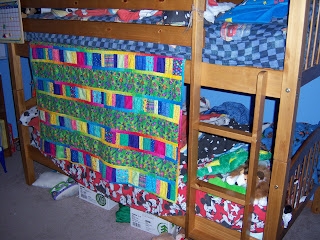 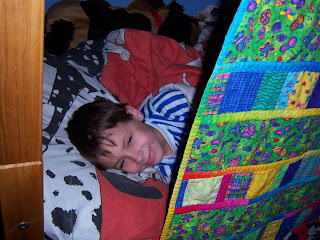 Posted by Coolestmommy at 7:36 PM