Can Probiotics Improve Your Mood?

I found an interesting article here talking about Probiotics and some of the new research regarding their effects on health. They were pushing the possibility of probiotics helping with weight loss, but the second half of the article caught my eye. It talks about improvement of mood while taking probiotics. 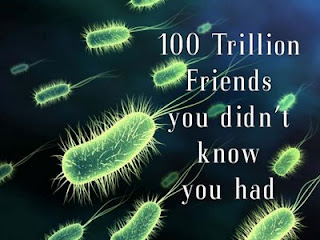 Here is a portion of the article:
"Then there’s the indication that probiotics might even glean cognitive or mood benefits....They note that the interrelationship between the nervous systems of the gut and the brain have something to do with these positive effects. The research, led by A. Venket Rao of the University of Toronto, found that probiotics increased the “good” bacteria in the stomachs of those studied and also led to a better outlook and mood.†
The report indicates that Lactobacilli and Bifidobacteria appear to increase levels of tryptophan in the brain, a chemical that "helps people feel better."† In turn, tryptophan helps produce the calming neurotransmitter serotonin†. And these researchers may be on to something, as more than 95% of the body’s serotonin is found in the gut. Studies, in fact, indicate that healthy bacteria, such as those found in probiotics, have a direct impact on mood and behavior by influencing the production of brain chemicals including serotonin and GABA. †

Lead researcher Rao said, "We were quite excited with the fact that these were positive results and we felt that probiotics truly have a role to play in mood and behavior.”†

Their findings were published in the journal BMC Gut Pathogens.
† These statements have not been evaluated by the Food and Drug Administration. These products are not intended to diagnose, treat, cure or prevent any disease.
I know that many 2E kids have a 'leaky gut' and probiotics are supposed to help. It's also why many 2E kids are put on selenium. Selenium is another chemical for your brain that is created in the stomach/gut area.
I was surprised at their findings regarding better moods. I think it's something to watch as other places continue to study the effects of probiotics and health. I know probiotics are important if you've had antibiotics to replace the 'good bacteria' in your stomach. The hard part is many 2E kids have milk allergies and can't get probiotics through food such as yogurt. So it comes down to finding a good supplement.
Posted by Coolestmommy at 7:00 AM