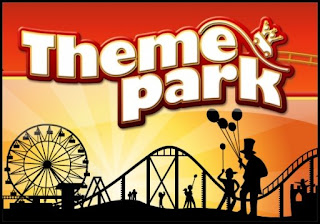 I've learned a great lesson this week. If you don't know me, let me share that I'm a deal hunting, bargain shopping, coupon clipping, money saving momma--and I often think I've heard of most ways to save money. However, a friend of mine in Minnesota has blown me away. Here's a great tip to take note of.

She's recently moved to the Minneapolis area and her friend & kids wanted to go with her & her kids to the Mall of America to Nickelodeon Universe (formerly Camp Snoopy). There was an error with their discount coupons so they had to speak to a supervisor. One of my friend's children is autistic and on the more extreme end of the scale. As she was talking to the supervisor about the discount coupons, she had a brainstorm.
Here it is in her own words, "I decided to ask if they had some kind of disability pass for my boy since he wasn't going to be able to ride the rides by himself and I didn't want to pay for a ride pass for myself."
"She [the supervisor] filled out a form and told me: "Go to the exit and present this pass. You will be able to move to the head of the line with four guests and will be able to stay on the ride for two turns." I was so excited! I've heard of this kind of pass for Disney World but had never heard of it for Mall of America's Nickelodeon Universe. Just thought I'd pass on that info in case it could benefit any other family."
This was posted to a listserv I'm on and several people pointed out that many amusement parks have this same option and will allow it for children with many disabilities. I knew of this but thought you had to be mobility impaired (crutches, wheelchair, etc.) to get it. I didn't realize that my 2E son with autism would qualify.
Wish I would have known this at DisneyWorld several years ago. He did best on the rides where we had a fast pass or were kid-swapping (both times you go through the exit and skip ahead to the front. Very little waiting.) At the time, I figured he just didn't like lines but I now realize all the things they do to 'entertain' you in line puts him into such sensory overload that he's finished and wants to leave by the time we get to the actual ride. He then cries through rides because he's overstimulated. Now I know that if I could get one of these passes, we'd be able to get him on a lot more rides and he would enjoy them more.
If you're off to a theme park and need this info, I hope it helps. To get the pass, most of the people on the listserv said to ask at the main ticket booth when you purchase your park passes.
*Photo credit: Nintendo DS Theme Park Game
Posted by Coolestmommy at 7:30 AM